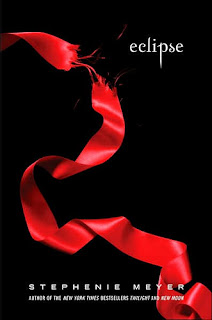 So, I'm done with this book and here's my review:

The probably best part about this book (and all others) is that you can't put it down. As much as a lot of the little things irritated me, I couldn't stop. I love me some Edward, and here... I'm beginning to re-like Jacob as well.

Then it gets confusing since although I love the series, a lot of little things bug me that I even wonder why I like it, why I keep reading, why I hunted down a copy of Breaking Dawn on the first day of the year instead of just relaxing. (It was not in the two (2!!!) Targets I went to and eventually bought it at a Barnes & Noble at suggested retail $25!). Today, I called and found a Target that carried it, drove down to Richmond, bought it for $17, then trudged back to Barnes to return the expensive one.

Bugging Item #1: Edward is a Prude!
Even as I read Twilight, (see review below) it was obvious to me that Edward was written as Meyer's perfect man. To me, yes, there's a lot of stuff I loved about the pureness of Edward's love, but come on! Bella's throwing herself at you, give in a little!!! Every time he stops a kiss or a move, I just want to slap him already.

Bugging Item #2: Bella is a whiner!
Wah! I love Jacob, but i'm not in love with him coz I love Edward! Wah, I can't believe Edward is making me stay away from Jacob because he is a warewolf! Wah, I'll get myself into trouble nevertheless! Wah, Jacob is in love with me! Wahhh!!!! Girlfriend, get a grip. Bella is the kind of person who invites drama. Because really, in the real world, if you know the person you don't love is madly in love with you and yet you go out of your way to give him hope (but say you don't give him hope) is cruel. Then, when Edward does not show jealousy, she can't believe it. *sigh* Also, she claims to love her parents to the point of dying for them but yet she want to end her life now so that Edward won't out-young her when she does become a vampire. I know she gives some reasons - but they're not good enough reasons for me.

Bugging Item #3: Classic Novel "Theme"
In New Moon, it was so obvious that they were going to tie in the Romeo & Juliet to the plot of the story. The moment they mention Wuthering Heights, I roll my eyes (to no one in particular, maybe to my dog, but he didn't get it) coz I know that at the end, they're going to tie it into the story. Predictable!!! Come on, should I expect to see Catcher in the Rye to be mentioned in Breaking Dawn?

Bugging Item #4: The I'm-Sorry Phenomenon
It seems to be everywhere in this book! Jacob time and time again does / says something to hurt Bella then calls a day later to apologize and says how much he really is in love with her. Bella does the same for Edward, she'll blatantly goes to La Push even though she knows that there are vampires looking for her and then apologize for it later. Edward apologizes for all the vampires that are now running after them. Bella apologizes to Jacob for all the bad things that were happening. Bella apologizes to Edward (and vice versa) for loving him too much. For a 600 page book, it was too much.

Bugging Item #5: No Character Development
A) I wish Bella was more developed and had more than these two sides: 1) I love Edward 2) I love Jacob. Why can't she be a character who was in love with a vampire but still aspire to be a doctor? Or hell, get accepted to Harvard? Won't it be a more compelling story if she has to find the right balance between loving a monster and still wanting a life / kids? Won't it be interesting to read about (let's say in book 6) for a 30 year old Bella remains to have a relationship with someone who wasn't aging? How about kids? The fact that she's just willing to die right now really bugs me - and her logic...There's none.

B) I wish Edward was more than just a handsome vampire that won't put out. I wish he had other things to say than "I love you Bella" and other things to do than protect her. We get it, he loves her - after that 2,879th time, it get's a little boring. The best part about the book for me was his interaction with Jacob but yet again, nothing seems to faze him. I love Edward and did not want him to be one-dimensional.

C) I wish Jacob didn't make a turn for the whiny wolf that he's become. He's a bit better now and I agree that objectively, he would be the better choice for Bella, but he was just annoying at times there. Again, other than his "coming out" that he loved Bella, there was really nothing else going for him.

But, it was an enjoyable read, and I did love the scene at the tent. Here's hoping Breaking Dawn would be the best book of the series!
Posted by mochablue at 11:11 PM