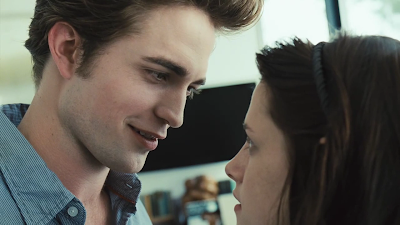 I'm late to the party, but here nonetheless. Here is my review of Twilight - the book and the movie. As a mother of two (and one at 6 months!) there's really no time for me to go to the movies, but I'm thankful my hubby let me sneak out of the house for a couple of hours to see this movie.

I'll start with the book. Mind you, I'm only halfway through Eclipse, so please don't tell me what happens. I'm trying to take my time since I devoured the first two books in a week (For a mom of toddlers - that's pretty fast).

The book is a page turner, that's one thing for sure. It does not drag at all. Okay, I'm loving this. I admit it. I was not into Anne Rice's stuff but I did read (and loved) Christopher Pike's The Last Vampire (I know. No one knows who he is. But I loved every single one of his book when I was a teenager. *sigh* that was ages ago). So the idea of a vampire falling in love with a human is very interesting and Meyers delivers with lots of swoon-worthy moments. There's romance, there's action, there's myth. It's all good. By the end of the baseball scene, when we find out James is out to hunt Bella, I couldn't put it down and was up till 2 am trying to finish the whole thing.

Bella - is a good heroine. I love the fact that she's clumsy, and not breathtakingly beautiful. In the book, Meyer's does a good job of taking you though her thoughts and how she gradually falls in love with Edwards. It was only in New Moon when she begins to grate with her constant talk of wanting to be a vampire.

Edward - I feel like he's written to be the guy a woman will fall in love with. I mean, he's old school. He loves Bella that he'll do anything to protect her. I am kinda in love with him because I picture the hot Rob Pattinson, but to be honest, Edward can be too much. There's a lot (and I mean a lot) of parts where he's confessing his love for Bella and how he aches for her, and longs for her, and particularly the part where he describes his reaction to her when she first meets him...It was a little too much. Men we know don't do that. You'll be lucky if you get an unprompted "I Love You". Bitter much? Hah, maybe.

No matter how you spin it though, kissing someone cold and hard is not hot. It is not sexy. I try to forget Meyer's description so much when she says things like "...and leaned on his cold marble body.." Ew. They do not work at all!! In my head, Edward still feels a little human. Now, on the other hand, a giant hairy warewolf...so not sexy either!! I know there are a lot of Jacob-Bella fans out there, and you know, I did like Jacob pre-wolf, but he was getting kinda arrogant there near the end that it was not pleasant.

So I heard the movie sucks. I wanted to see it anyway since (as previously mentioned), I am kinda crushing on Robert Pattinson and was curious to see if he can do a better Edward than the one in my head.

The movie was okay. I only say this because I came it with a very very low expectation. But here are my following thoughts:

I hated the music. I'm sorry.

I thought Bella was a little maarte (over acting) at times there. Like she went to a "facial reaction" school or something. Edward also failed at being sexy. The moments I loved are when he was smiling / flirting with Bella. The was a scene where he was walking with Bella to school and he had sunglasses on. Hot! But as mentioned above, the declaration of love feels a little too much, and in the movie, it felt rushed. Like, hey, we just met and not you're in love with me?! It was unsettling.

Special effects I give a D-. Edward jumping though the trees somehow is giggle-worth than it was swoon-worthy. I mean..I looked silly!!! He was dangling on a branch! Silly! Another scene that was ruined by the effects: the kissing scene. It was a great scene! I actually was feeling the tension / urgency and passion than *wham* he slams on the wall and I stifle a giggle. Geez.

Among the others, Emmett seemed like good casting. I don't know how I feel about Esme. I see her and think of Grey's Anatomy. Jasper...looks weird. Not what I pictured. And Rosalie not as hot as described in the book.

The pacing / atmosphere seemed off. Not sure what could've been done to make it better. I am hoping the next director can somehow make it better with New Moon.

And one more hope for the next movie...less "vampire" looking please. I get that they're supposed to look vampire-y but it they looked like that they would've been outed on day 1! Less make up please!!!!

Okay, that's all. I've run out of things to say. Well, not really but I think I should stop nevertheless. The scene shown above was one of my favorites. I love the cute - less complicated - scenes.
Posted by mochablue at 9:38 PM 2 comments: