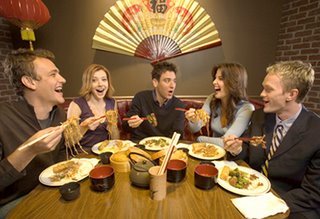 When I saw the title for last night's episode of How I Met Your Mother, I gave a little squee! First of all, I love the show. Second of all, it's a show about kids who recently graduated / in a entry-level job, and there's not a lot of that on the air. Thirdly, Ted's an Architect! Whoo hoo, was to represent.

Now, there are other shows who have a main cast member as an architect. In Two Guys, A Girl & A Pizza place, one of the "guys" was an architect - but really, even though they're architects, we never really see past them carrying a blueprint, or wearing a hardhat. Last night's episode was all about Ted being an architect!

The premise of the episode was that Ted & Robin had their first fight ever because Ted was complaining about drama at work and Robin was bored about Ted whining about it. Which let to Ted to believe that his job is boring. [hee. is our job boring?? probably.] Cue Barney telling him to use his being an architect so score some chicks and introduce himself as, "Ted Mosby, Architect" Haha...so cute! And it does work because when the chicks at the bar learn he's an architect, the utter a phrase I thought I'd never hear on National television: "You're an architect? Architects are Hot!" [I giggle as I type] Anyway, I thoroughly enjoyed this episode and kudos to the writers for making such a "boring" topic funny and interesting!

Watch How I Met Your Mother monday nights on CBS.
Posted by mochablue at 9:59 PM No comments: 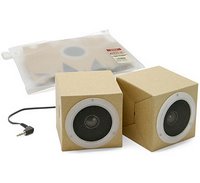 The MoMA Store always have cool stuff. In fact, all museum gift shops always have cool stuff - but look at these compact, carboard speakers. Not only are they cute, they can be folded away when not in use. Check out the cool line of MUJI stuff at the online store as well.
Posted by mochablue at 8:04 AM No comments:

Could I be wearing any more buttons!? 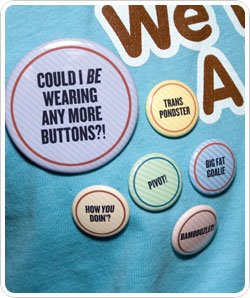 Ha! Friends' buttons! I'll wear that - espicially "Pivot!" one of my favorite Friends line ever! Get these buttons from Glarkware - the place to get TV-inspired shirts and stuff. Be Aware that this is an NON Item (Now or Never). Darn. I just realized that this item has already closed.

Hmm...other Friends notable quotables:
"Fafanapoli!"
"Moo Point"
"But it hurts my Joey's Apple!"
"My Sandwich"
"Oh. My. God." (Janice)
"It Tastes Like Feet"
"They Don't Know We know They know We know"
Posted by mochablue at 8:46 PM No comments: