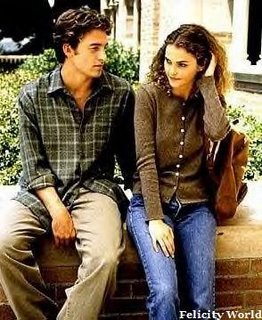 I am right in the middle of re-watching the Felicity DVDs and as always, I like to listen to all the Audio Commentaries featured in the DVD. For example, I loved listening to Michael Patrick King talk in the Sex & The City DVDs because I learn cool things, behind the scenes kind of things and reasons for certain story arcs.

I tend to get irritated with commentaries that don't really pertain to the episode - like when cast members are just chatting, and they usually forget that they're supposed to do a commentary and get stuck on what they had for lunch that particular shoot. Then, I listened to Keri Russell & Scott Speedman's audio commentary on the Season 2 episode "The List". Apparently, the NY times even deemed it the sexiest DVD commentary ever. Yes, it was hot. It was sexy. It was flirty. It was too bad I've owned these DVDs for a while and only discovered it now.

Lizette - If you haven't seen it - Go WATCH it so we can talk about it. Here's a sample...

Posted by mochablue at 5:16 PM No comments: 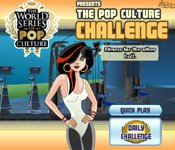 The new game show from EW / VH1: World Series of Pop Culture is so much fun. I see the pop culture quiz once in a while in Entertainment Weekly but never seem to be any good, but the show is very entertaining and addicting. Aside from 3 the Hard Way, all the other contestants seem pretty good and nice. Sooo...go watch it!
Posted by mochablue at 5:23 PM No comments:

Last week Joanna, Kay & Deb came up to see me and Josh. Along with them they brought some really yummy vanilla gelato from Ciao Bella. Oh, I must say it is heavenly!! Thanks guys!

If you want, just pour a shot of espresso over the vanilla gelato, put a little whipped cream and you'll get just the most amazing afogato ever. Hmm-hmm.

Posted by mochablue at 1:20 PM No comments: 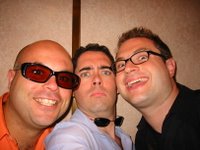 I recently rediscovered the beauty of podcasting. In the morning when I breastfeed, I'm bored you know. I really just...sit there and wait for Josh to finish. When my morning show is over (or if it's a fake-live day), I turn on the BNL podcast. That's another thing, I just recently found out that they podcast!

Their podcast is great, not just because Ed is entertaining, but I actually learn a few things. I found out that one of my favorite songs, Just A Toy, is about. What if Pinocchio had an older brother? What if Gippetto was laboring over this puppet, telling him how he wanted to have a real boy, and he's laboring over him - but somehow time has past and lost interest in this puppet and set it aside. Later he made pinocchio - who became a real boy. This puppet with half a soul was left to languish. All he can do is watch his brother & father from the shelf, brewing and stewing.

Better than him, worthy of you
Given the chance that he had, I know what I'd do
Forever, ever mine
I call him liar, you call him son
If I could move, I'd set him on fire and I'd run
Forever

Anyway, such a cool song. It's such a shame that BNL is kinda known for kooky songs like One Week when they actually are a good band. Check out this video for Call And Answer, another one of my favorite songs from them, sung beautifully by Steven Page at a Border's appearance.

Posted by mochablue at 6:42 PM No comments: 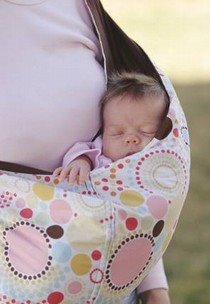 If you're looking for a traditional sling for your baby - check out Lucky Baby slings. They're reversible (shown in lucky circles with cocoa brown) and even has a small pocket for your keys and such! I actually bought one for Josh but it just wasn't for him. I still think it's a great sling. It's simple and their designs are cool.
Posted by mochablue at 8:20 AM No comments: