The Men of True Blood

As we near the end of the second season, I would like to give a shout out to the Men of True Blood. I realize I love them all and they entertain me highly! 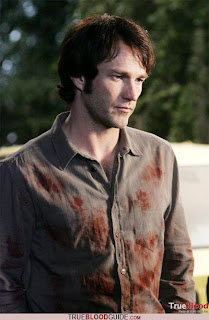 Bill Compton, Vampire
As I've probably mentioned before, it was not love at first sight. My first thought was, "Ugh. This is the guy? He's so not handsome and he's kinda old..." But at the end of the episode, I bought it. I loved - fuckin' love - the chemistry between him and Sookie and it was palpable. I loved the fact that we was old fashioned. The fact that he recycled. And that he wanted to mainstream. I wish with all my heart that the make up people (please...someone read my plea!!!) would restore the Bill that I love to his most handsome look (see picture). Bill shouldn't be all powdered up - he looks old that way. Bill shouldn't have man bangs. Come ON!!! Bill shouldn't be high waisted. What? Okay, I get it - he's old school. I guess I can live with it. Every time I see him all high waited like that, I have the urge to pull his fucking pants down. YEAH! What...just me? 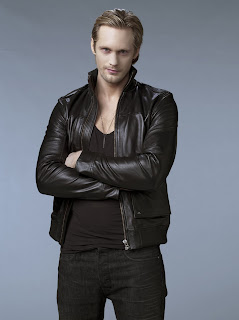 Eric Northman, Vampire
Since I have not read the book, I didn't highly anticipate the coming of Eric. And even, when he first arrived on scene sometime in Season 1, I was not impressed at all. Longish hair and sando? Ugh. But then, as soon as he chopped that hair...wait. No, actually, it was a bit before that. I think I started loving him in the one scene where he was in the dungeon with Lafayette and he ate that other guy and was wondering if blood got in his hair, and that he did not kill Lafayette. Then of course, he cuts his hair and his beauty, sorry, sexiness - exudes. Yes, he is the hottest vampire out there. I'm going there. Hotter than wimpy / stalkery Edward Cullen, I'll tell you that (and if you know me, you know I had a few months crushing on Pattinson).

A big part of Eric's appeal is that he is the opposite of Bill and that he is "bad" and that he doesn't care. He is obvious in his pursuit of Bill's human and it's almost like a challenge. He is that part of you that wants the bad boy, the guy you know will just. break. your. heart. and you don't give a fuck. 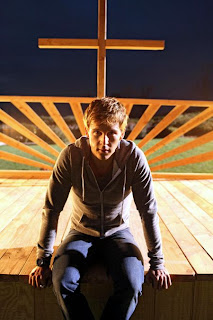 Jason Stackhouse, Human
I knew from the start that Jason was a beautiful piece of specimen and he's one of those guys that just look so damn good naked. But even then, he is the last one I really fell in love with. I mean, even though he spend almost all of his screen time in the first season naked, it was almost always empty for me. It was like, yeah, yeah, dumb guy fuckin' the next piece of ass. Let's move on to a better storyline!!! I did love the parts in the first season where he became "close" to that one vampire and sort of created this friendship with him. The "V" storyline, I didn't care for, especially those scenes where they were getting high. Meh...but this season, although slow in build up, Jason rocked! From his innocent musings ("Jesus is the first vampire") to his giving in to the pastor's wife to putting a bebe bullet in Steve Newlin's head to hugging the rap out of Bill to being "The God Who Comes", Jason has skyrocketed to being such bad ass, I love it. I love him. I love love love him this season. 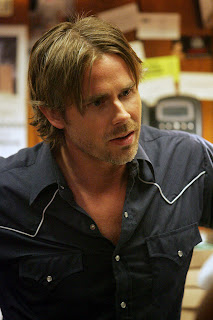 Sam Merlotte, Shape Shifter
When Sam first came on screen, my first reaction to him was opposite of every one else. I immediately loved him. I thought, this was the guy for Sookie. Then I soon realize Sam was the "unrequited love" portion of the program and thought, damn it. He's cute! And although I loved him right away, after the Pilot, I was soo into Bill that I really did not want Sookie to end up with Sam which brought him down a notch in my book. Not very fair, I know because as Sam by himself, he's a good guy and a great character. I was iffy about the Tara/Sam hook up, but I also wasn't hot with the Daphne/Sam hook up. I guess I'm not sure I found the right gal for him yet. Haha!!! I'm loving him know especially the last few episodes where he figured out that Maryann is actually after him. The "Fly on the wall" thing was genius and so was the "Smite Me!" Here's hoping he will save the day at the end of this season and get himself a nice decent woman. 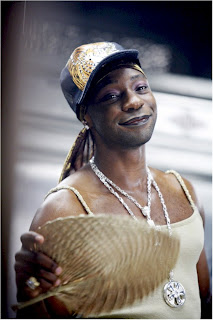 Lafayette is awesome. Although I'm not as much of a fan as some people out there, I do love him and thinks he brings a much needed foil (is that the correct term??) to the current set of heroes. He's brash, he has pizzaz, he's good guy, he's a bad guy. I was glad Alan Ball kept him although I heard from the books (spoiler alert!!) that he was the body in Andy's car. I loved it when he stood up for himself and his being gay in a town where tolerance is sometimes still not prevalent. I'm happy he sees through Eggs (Devil in a Sunday Dress) and was there for Tara. I'm curious to see what pushing V for Eric / Pam will do to him.
Posted by mochablue at 10:40 PM No comments: