Sex and The City Movie Review 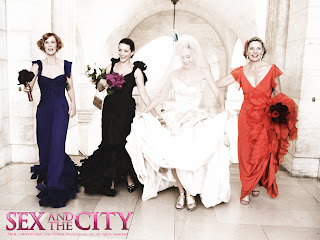 Since I am not working for now, I have today off. I have debated yesterday between seeing this movie alone (since it's a Friday morning! Who is free!?) or eating a India Palace - which I am craving for but is all the way down in Alameda.

Listening to the radio this morning convinced me to go to watch this movie. It was getting good reviews - and there were rumors that it's going to be #1 in the box office this weekend, and there are a lot of places selling tickets out! I even debated, should I Fandago this thing to make sure I have a ticket? Then I chuckled, hell no. It's 11:00 am on a Friday morning! Everyone's at work. There's no way it'll sell out. The last time I watched a movie this early (yesterday, watching Made of Honor) there were literally 3 of us in the theater.

So, I drive. My mouth dropped open as I turn in the parking lot. It was full! And there was a line to get tickets! No fucking way!! I panicked a little. It was the weirdest thing. I was able to get tickets, but man, when I entered the theater, it looked like it was a 9 pm showing with the crown of people already seated! It's fucking 11 am!!! Then, I looked closer and realized why. 90% of the crowd were the senior folk! Ahhh, it all makes sense. Yes, they may be old, but they sure are getting it on! It was like a retirement home decided to go on a field trip and it was to the Hilltop Century 16. I found a seat in between two 80 year old gentlemen (obviously with their dates). It was fine, I thought, if I bawled, then would they even really notice?

And bawl I did. I love this movie. I haven't cried this much in a movie theater since Stepmom, and that was just tears. There were moments when my whole body cried, you know, the very unattractive cry where your face turns weird because of the emotion?

The first real cry came when Carries finds out Big wasn't coming and said she needed to get out of there. At the same time, Big realizes that was a mistake and turns back. They meet in the street and the reaction from Carrie, and even Charlotte as they attack Big - I cried like I was the one in that situation - the frustration, the emotion, it was all so real.

There were lots of cries in the movie, but as always, the story that gets to me is Steve & Miranda. I can't help it, I love them together, and their story...sigh. I think Gel's review was spot on, they didn't make Steve out to be a "bad guy". Yes, we know it's wrong, but at the same time, life isn't like a fairy tale and people do make mistakes, and in the real life - you either move forward or go your own separate ways. I like the fact that they didn't take the "you go girl" road on here. It was heartbreaking. I cried at Steve's remose, I bawled when they met again at the Brooklyn bridge.

Charlotte, always the optimist, but always in the shadows, I think took a more backseat role in this movie, nevertheless, I give props to Kristin Davis since there's two Charlotte scenes that made me bawl. One, as previously mentioned, when they confronted Big in the street, and second in the scene outside the restaurant where she finally told Big off. I really felt what she meant - in that out of everyone, she rooted for him, defended him...

Samantha, i thought, also took a backseat role in this movie, and aside from the comic / sex relief, I didn't really care much that she wasn't in love with Smith anymore. And you know, I liked them as a couple during the series.

I also thought that the JHud side story was -hmm- filler-ish. Like, yeah, they just needed another person to show Carrie what Love is. I didn't feel much connection with her and Carrie, but oh well. Oh and yeah, like Gel says, "renting" a purse, it not cheap and in the end - you don't have anything to show for it!! I don't believe Carrie would not have known that there is such a thing. Come on, she lives fashion! And if you are unemployed, I'm sorry, you don't have the mony to rent a purse. Hello, you buy a non-label one at a Target and call it a day.

But aside from all of that, I loved the movie. I loved that Carrie took a portion of the responsibility for the wedding that wasn't and showed a side of her that's...normal. Wearing a no-label wedding suit to City Hall, and showing that she actually really loved Big and not jut for the money.

It was good. It was very very good.
Posted by mochablue at 2:43 PM No comments: