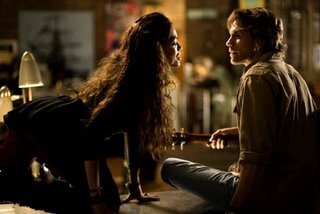 Finally, I take the time to review the movie that I've been anticipating for months. I did see Rent over the Thanksgiving holiday amidst all of the Harry Potter fanatics. In the multiplex where I saw the movie, Rent was located in the small, farthest theater (I guess they knew that they weren't going to sell out on this movie). I felt a little sad...

I loved the movie. I thought it was as accurate as it could to the theater version. I wasn't as turned off by Rosario Dawson as some people a I know (wink wink) and thought she did justice to Mimi. And for me to love Rent, I must love the Roger/ Mimi. That's because my fave songs have always been: Another Day & Light My Candle - the two Roger /Mimi songs.

Tango: Maureen, which has always been hit or miss for me (depending on who was playing Mark...I saw on Broadway when Joey Fatone was playing Mark...but I'm digressing), was a "Wow" for me on the film. It really worked there. The dream sequence with Maureen playing both sides was a good addition to what both Mark and Joanne were feeling towards her.

Good job to Jesse L. Martin as well. When he said "...Live in my house..." at the funeral, I started bawling. He was that good. And so charismatic!

But here's my complaints: 1) What the hell is Roger doing on the cliffs of Santa Fe? It felt soo cheesy. and 2) I know they're trying to be as accurate to the play as possible, but really, when you get an almost dying person in your apartment, and the couch is full - you clear the couch! You don't put her in a cold stanless steel kitchen table! Come on!!!

Here's a like to Smokedog's review of the same movie. Enjoy!
Posted by mochablue at 6:55 PM