Wow. It's been more than a year since I've updated this blog. Funny how a Facebook account can just get the point across faster...but not when you don't have the friends that share your passion. Where are the Dexter fans?
I've just for the past few weeks watched all the Dexter episodes from start to finish. I've hesitated watching it all this time because I was afraid to see all the gore and the violence. Little did I know, I'd get so invested in the characters, the storyline and everything the way I was with other great shows like Six Feet Under, etc. 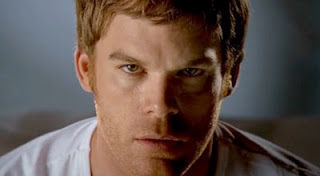 It all starts with a really amazing actor. Michael C Hall. Wow. I've loved him in Six Feet Under as David Fisher and I believed him in it. This, as Dexter Morgan, he is so different and true that I can hardly believe it's the same actor playing 2 very different roles. I am in awe.
As I've watched the entire 5 season in just a few weeks, I hope to remember all the nuggets that I've enjoyed in this roller coaster ride.
Random things in Season 1 to comment on:
Random Things in Season 2:
Will post about the next few seasons next!
Posted by mochablue at 2:33 PM